The Void Community is one of four Guilds in Radiata Stories located in the back of Club Vampire. it is home to the rogues of Radiata and is sometimes referred to as the Bandit Guild. Its members are thugs, thieves, and criminals of all natures.

However, the Void Community is far more than it seems on the surface. Although the leader of day-to-day operations is Ortoroz, the guild has a shadow leader from a distant land named Nyx.

It is unclear how much of Nyx's grandeur claims are truth, if what he says is taken at face value then it can be concluded that the Void Community manipulates a vast majority of goings-on in Radiata. 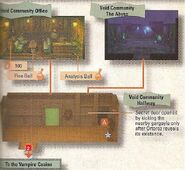 Items in this area:[]

Community content is available under CC-BY-SA unless otherwise noted.