Radiatapedia
Register
Don't have an account?
Sign In
Advertisement
in: Pages using duplicate arguments in template calls, Guilds of Radiata, Stubs,
and 3 more

Theater Vancoor is one of four Guilds in Radiata Stories, it is home to the warriors who act as mercenaries in Radiata. It is constantly at odds with the infamous Void Community and many of the members between the two are mortal enemies. Located in the Yellow Town of Sun and Glory, Theatre Vancoor has four floors, a basement, and a sub-basement with a jail cell that leads down to the Path of the Spider. The guild is led by Chief Elwen and Deputy Chief Gerald. The guild is broken up into squads that are led by sergeants, except for Zweit Squad which is led by Gerald.

For all you scum, otherwise known as warriors, in Theater Vancoor! Here are some rules to live by. Obey them with your life. They're pretty simple, really.
First, Chief Elwen is a god! Treat her better than your mom, respect her more than your dad. If she tells you to die, do it with a smile on your face! If she points to crap and calls it pretty...you smile and call it beautiful.
Second, always obey orders from those of higher rank. Regardless of age, an order is an absolute order! Don't talk back. Whatever the order, reply "Yes, sir!" with a huge smile on your face.
Third, never let other guilds underestimate you. Our guild doesn't need those that can be beaten by members of other guilds. Also, make sure the members of Void Community know you're better than them. Theater Vancoor is filled with the best warriors of Radiata! Don't disappoint me or make me look like an ass!
That's it. Those are the rules to live by at Theater Vancoor. Anyone who can't remember this, I'll pound it into their head. "

Map of the Premise[] 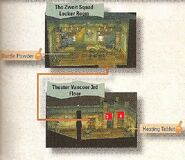