Trainee leader of the Void Community. A master of disguises. She can completely transform herself so that even her closest friends are unable to recognize her. A smiling face always hides what she is thinking. She can always be counted on to complete a job, however difficult. No one knows much about her private life.

Step 1: Herz has disguised herself as Conrad; talk to her with the real Conrad in you party between 16:15 and 17:30 in the Blade Pharmacy, talk to her and fight her

Step 2: This time Herz disguises herself as Caesar. Talk to her with the real Caesar in your party between 18:50 and 19:40 in the Verontier Armory, talk to her and fight her

Step 3: Herz's last disguise is Alicia. Talk to Herz with the real Alicia in your party between 20:30 and 1:30 in Carl's Pub, talk to her one last time to defeat her in a duel

Herz doing a backflip in a fight. 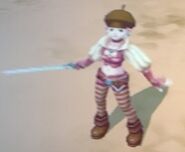 Herz after winning a battle