Elwen is the Founder and Chief of Theater Vancoor.

She first appears in the game as the Chief of Theater Vancoor, and takes an immediate interest in Jack Russell, seeing a lot of potential in him. Elwen also acts as a calm, wise leader compared to her trusted Deputy Chief, Gerald, who is hotheaded and impulsive. After Jack, Jarvis, and Gerald escape an encounter with Nocturne, Elwen promotes Jack to sergeant to begin preparing him to succeed Gerald as Deputy Chief. She then assigns him to investigate Nocturne's activities, and is later seen meeting with Parsec.

In the Human Path, Elwen is a recruitable character and one of the leaders of the human war effort, attending Lord Larks' meeting at Radiata Castle. After recruiting every other member of Theater Vancoor, she can be recruited into the party and is one of the strongest party members in the entire game. If Jack has Elwen, Kain and Curtis in his party while talking to Nyx she will try to convince him to help Jack stop the dragons.

In the Fairy Path Jack meets Elwen on the bridge between the Dorse Region and the Dichett Region, with Theater Vancoor having been asked to assist in the killing of the fire dragon. She questions Jack's motivations and reveals that she too fights for someone, before fighting Jack to determine who has the stronger promise. Win or lose, Elwen allows Jack to pass while commenting that he may be the one to save everyone.

Elwen's origin and past are shrouded in mystery, as her Friend List profile questions her race being human. She seems to be aware of the dragons' duties on cleansing the world from humans, as shown in her talk with Parsec.

Part of her past revolves around the figure known as Alfred. He was the former bearer of the the legendary sword Avcoor, and Elwen, whose name was El at that time, was one of his followers. It is hinted she was in love with him, and when he passed away, she inherited his sword, assuming the name of Elwen and forged the warrior guild. Elwen constructed a shrine for him in the depths of the Path of the Spider and prays there every day.

Chief of Theater Vancoor. Polite and calm, she encourages people to do the right thing. Alfred, the bearer of he Avcoor, had a follower by the name of El. When Alfred passed away, El became Elwen, and she constructed the warrior guild. Many fairy creatures and dragons know her personally.

Human Path Only To recruit Elwen, you must recruit everyone from the Warriors Guild (Theater Vancoor). Once you recruit all Theater Vancoor members, you must follow her either to the Path of the Spider Charnel or the Chief's Room. Once she is there, talk to her and defeat her. 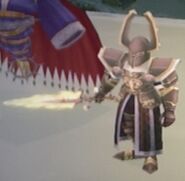 Elwen after winning a battle

"You lack real strength, because you wield your sword only for yourself. Remember this: only those who fight to protect another are able to acquire true strength."
—Elwen, to Jack when he was accepted into Theater Vancoor

"Chief of Theater Vancoor. Polite and calm, she encourages people to do the right thing. Alfred, the bearer of the Avcoor, had a follower by the name of El. When Alfred passed away, El became Elwen, and she constructed the warrior guild. Many fairy creatures and fairy creatures know her personally."
—Friends Page Description