Cepheid of Great Skies and Vicissitude is the wind dragon and protector of the elves.

During the Human Path, Cepheid kills many Radiata Knights and injures General Dynas Stone and Captain Cross Ward before Jack Russell kills both Cepheid and the Light Elf assassin Gil.

In the Fairy Path Cepheid is slayed by the Knights while Gil leads the Light Elf forces in the capturing of Fort Helencia.

Once they player completes either storylines they can face Cepheid and the other dragons in the Dragon Lair Cave.

In battle Cepheid starts off using a wind shield that covers its whole body. The player and their party have to go to the edge of the map to attack Cepheid. Once enough damage has been dealt, Cepheid will lose the shield and go from the largest dragon to the smallest. 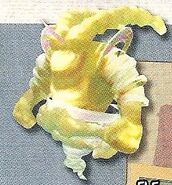